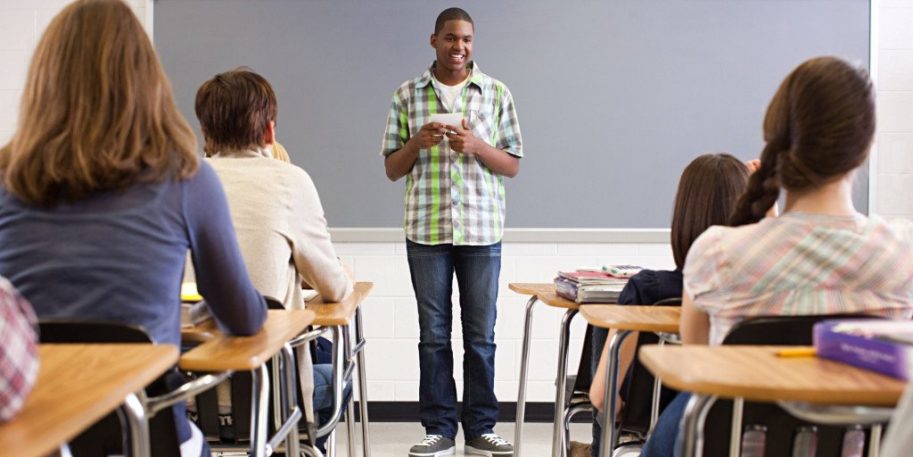 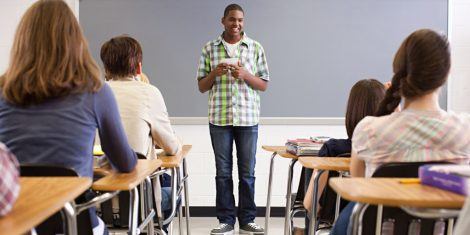 “I felt naked.” Those were the words of one student after leading her classmates in a discussion on the previous day’s reading. “My dad told me if I get nervous talking in front of others, I should picture everyone else naked. That didn’t work. I was the one exposed, not them.” While she was prepared, engaged, and articulate, she nevertheless came up short in her own eyes. She’s not alone. For many, the anxiety felt during Socratic seminars not only prevents them from enjoying the conversation; pedagogically, they’re prevented from comprehending or retaining any of the lively discussion. She ended our conversation with a phrase I’ve heard time and again, “I just can’t express myself in front of others.”

That last sentiment—about self-expression—helped place her initial feeling of nakedness in context. Understanding and addressing this dynamic has greatly increased my ability to help every student engage more freely in class discussions, not just the gregarious few. Once one understands that entering class discussions with the goal of self-expression actually hinders their ability to communicate, they’re able to converse in a more loving, humane way. To understand how to achieve such a classroom culture, we have to understand nakedness.

Interestingly, Adam and Eve don’t become naked as a result of their sin, they become aware of their nakedness as a result of their sin. More than shame, they become hyper self-aware. They become awkwardly, painfully self-conscious. They look to themselves after they sinned precisely because they looked to themselves when they sinned. While they were called to look wholly to God for direction, provision, etc. they’re tempted by Satan to do the opposite, and they succumb. Their eyes are thus turned from God to their own person. They feel naked in front of God and one another.

Self-expression per se is not a bad goal, to be clear. It’s simply an incomplete goal in class discussion or any other form of dialog. It will lead to the existential feeling of nakedness because it will insist that we look to ourselves for success rather than to our classmates, teacher, or God. Self-expression will tempt us to do things like strain our interpretation of the text being discussed to appear novel or clever. Or it may keep us so focused on what we might say wrong that we say nothing at all.

So what’s the solution? As we know, God provides Adam and Eve a sacrifice to cover their nakedness. More to it, he gives them a promise, a word on which to turn their eyes (Gen 3:15). The entire Old Testament, in fact, is God’s call for his people to turn their eyes from themselves (i.e. every man doing right in his own eyes) back to him and his word. This is why Jesus sums up the entire law as (1) loving God with all your heart, mind, strength and (2) loving your neighbor as yourself. God is calling humanity back to a radically extrospective life—focused outside of ourselves on God and neighbor.

Thus, every conversation we have, including those conversations around the Harnkess table, should have a higher goal than mere self-expression. By making self-expression subservient to other goods, a student can focus on goals such as truth (centered on God) and love (centered on neighbor). As a result, we leave discussions not introspectively asking, “How did I do?” Instead, truth will require we evaluate our words using the text being discussed, logic, God, etc. And love will have us ask “were my comments helpful to my peers?” Both metrics (truth and love) will take our eyes off of ourselves.

Of course, simply teaching students to reset their goals in class discussion can’t ultimately alleviate their vulnerability; such is the cost of exposing ideas, dreams, and hearts to others. But perhaps by turning our eyes away from ourselves—to our classmates, the text, God—we’ll become less aware of our nakedness. Then, the classroom can be a place of safety and respect, mutual encouragement and generosity. Students won’t speak merely to express themselves, but will contribute to aid their peers, find the truth, and understand and enjoy the world. Like Adam and Eve before the Fall, students can have their eyes captivated by the beauty of creation and the majesty of the Creator.

Dustin Messer teaches theology at Legacy Christian Academy in Frisco, TX. Additionally, Dustin is a Sr. Fellow at the Center for Cultural Leadership and is on the preaching team at Christ Church (PCA) in Carrollton, TX. A graduate of Boyce College and Covenant Seminary, Dustin is completing his doctoral work in religion and ethics at La Salle University.

One Comment on “Socratic Seminars and Student Anxiety: The Naked Truth”