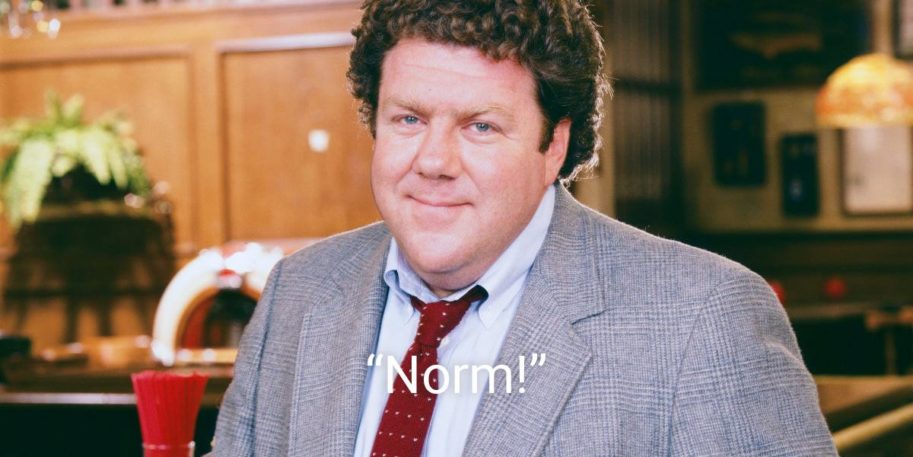 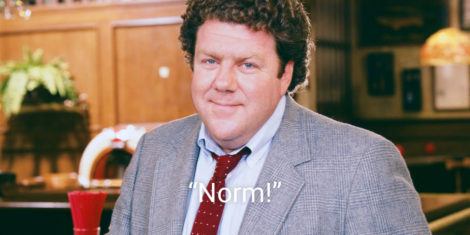 If your television viewing history includes the eleven-year period from 1982 – 1993, you probably recall a sitcom titled Cheers. The show is set in a bar named Cheers in Boston, Massachusetts, where a group of locals met to have a drink, relax and socialize. The refrain from the show’s theme song quickly became the tagline, Where Everybody Knows Your Name. The cast members (Ted Danson, Shelley Long, Kelsey Grammar, Woody Harrelson, Rhea Perlman and others) assumed some of the archetypal characters that would be likely found in many bars. The one character that always provided me with a good chuckle was the actor George Wendt, known on the show as Norm Peterson. Norm’s character was actually based on a frequent customer that the show creator Les Charles had met when he bartended in college. Norm’s entrance into the bar was a running gag, beginning with a greeting by Norm followed by the bar crowd yelling his name. And then would come a quick, one-line comeback from Norm after Sam or Woody (bartenders) would ask Norm a question:
“Hey everybody” Norm
“NORM!” Everyone
“How is life treating you, Norm?” Woody
“It’s a dog eat dog world, Woody and I’m wearing Milk Bone underwear” Norm

That was the capital N Norm part of this blog title. The consistency of Norm on Cheers was something that people depended on for a good laugh. Norm was one of only three actors that appeared on all 275 episodes of cheers. He arrived on time, stayed until the end, contributed to every discussion, and left Cheers thinking, “that had been time well spent.” Excuse the play on words but Norm was a norm for Cheers.

I like the intentionality of norms, specifically meeting norms. While meeting norms do not fall on the same scale as God’s rules for living such as the Ten Commandments or Matthew 7:12, meeting norms should flow from our understanding of scriptural truth and authority. They should recognize the inherent value of each individual, and apply a standard for co-laboring together for the Kingdom of God.

I am guessing that you have been part of meetings where people consistently arrive late or are on their cell phones for most of the meeting. My hypothesis is that these things happen because, as leaders, we forget or simply do not take time to identify a set of norms that will help us do our business well. Whether that be a grade level group, interdisciplinary teams, leadership teams, or special project groups, we fail to set the ground rules that will encourage behaviors that will help us do our work and discourage behaviors that interfere with a group’s effectiveness.

Norms are developed, either intentionally or unintentionally. Whether we formally acknowledge them or try our best to ignore them. They become the unwritten rules for how we act and what we do, governing how we interact with each other, how we make decisions, and how we communicate. Moreover, good norms, like the Ten Commandments, last. There is a reason that Pope Francis has encouraged the world to embrace “the art of living” through the Ten Commandments. These norms model for us the importance of healthy relationships, to think beyond ourselves, to balance community and individuality, and provide grounding principles that can be used to build a good place to do the vocational work God has called us to.

Some questions to ask yourself if wondering about whether to take the time to establish meeting norms:

Do you have a good set of meeting norms to share? Please reply to this post so we can get better together…