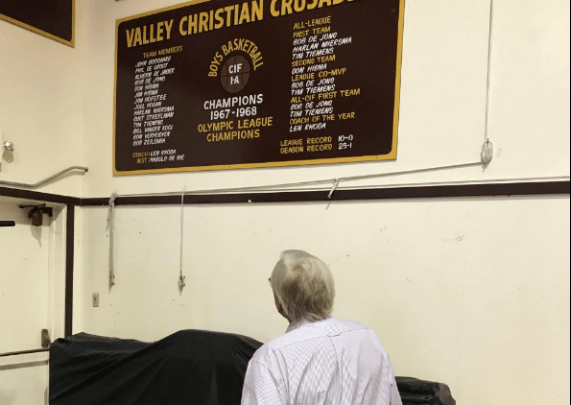 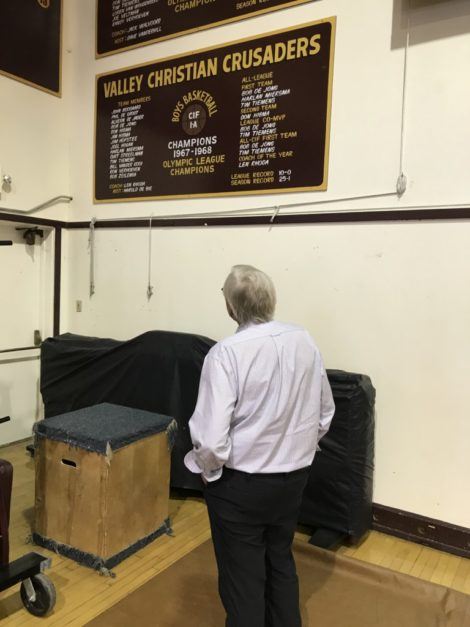 Earlier this year, I had a unique opportunity to accompany my father-in-law (Dr. Len Rhoda) on a trip to Southern California, to Valley Christian High School in Cerritos where he and my mother-in-law (Lee) began their teaching and coaching careers. The purpose of this trip was to meet up with a team he coached to the 1967-68 CIF State Basketball Championship. The team was to be honored in a halftime ceremony during the varsity boys game. During our drive to the airport Dad expressed a bit of vulnerability in a conversation centered around whether the players would want to interact with their old coach. Or, would these former athletes prefer to talk with each other since they may not have seen one another in quite some time?

That question was answered immediately as we entered the hospitality room before the game. I think 8 of the twelve members were present (two had passed away) and it was like Dad had called a timeout. They surrounded him with smiles and laughs, calling him “Coach” like they really did not know his actual name. Three of the players came up to me individually throughout the evening, sharing stories about how “Coach” had left his personal mark on their lives. What was interesting to me was that none of these stories were about actual games but rather other key moments or life episodes. For example, the starting power forward talked about how Coach and Lee, took him under their wing during some tumultuous times and walked a difficult journey with him. A time where this big, strong athlete felt weak and was in need of a mentor who knew the road he was traveling. Coach is retired, after a long career of shaping and influencing young men and women, and lots of wins and losses along the way. Coaching provided an incredibly powerful environment for him to work alongside the Holy Spirit to shape lives and disciple hearts.

The title of this blog, however, came from a recent coaching move, made by Golden State Warriors coach Steve Kerr. If you do not follow the NBA, Coach Kerr is a person who has had remarkable success, coaching the Warriors to two NBA championships in the last three years. After a recent losing skid (three out of four games), Kerr turned the operations over to the players as they prepared for their game against the Phoenix Suns. Players led the shooting sessions, film sessions, even the actual huddles during the game against the Suns. Kerr stated “It’s their team. I think that’s one of the first things you have to consider as a coach. It’s not your team , it’s not [general manager] Bob Myers’ team, it’s not [owner] Joe Lacob’s team — although I’m not going to tell Joe that. It’s the players’ team, and they have to take ownership of it. And as coaches, our job is to nudge them in the right direction, guide them, but we don’t control them.” The result was a good one, a 46-point win over the Phoenix Suns (I know, the scheduled aligned itself well for this experiment!).

As those called to lead Christian schools, my challenge for you is to consider these two stories collectively. Coach Rhoda used the environment he was given to make a lifelong impact on the lives of the student athletes he was privilege to coach, to the extent that even after 50 years, they still surrounded him to share their life stories and express their gratitude. Coach Kerr used the environment he was given to put people in a position to lead, to take full ownership of how things were going to go. Both coaches recognized the privileged position they had been given. Positions of authority but also knowing that there is real power in recognizing that we are both strong and weak. As those called to lead Christian schools, we have been entrusted with God’s most valued part of Creation, children created in His Image. A responsibility too large to shoulder alone. Is it “your school” or “our school”? Is it “your classroom” or “our classroom”? Or is it “His school” and “His Classroom?” For in Him, we are.