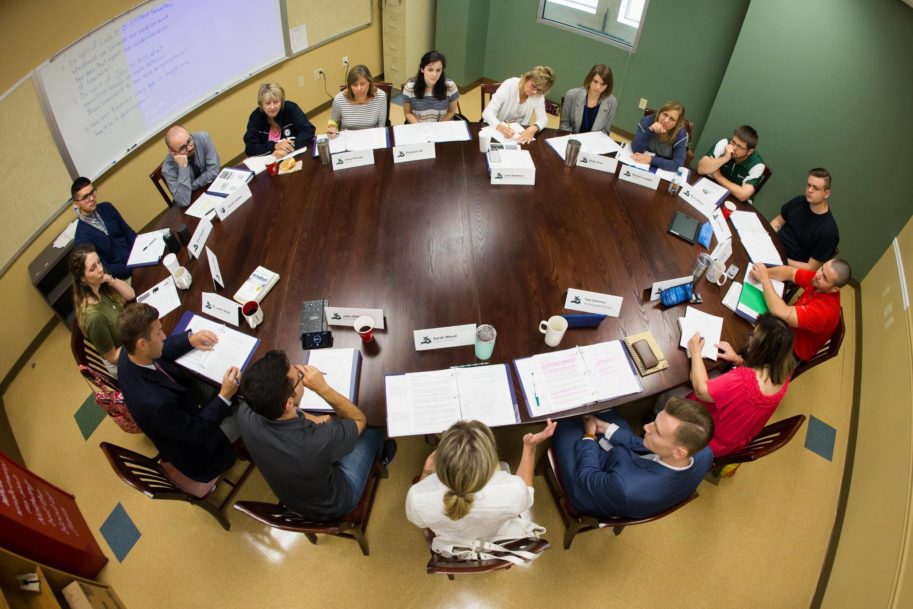 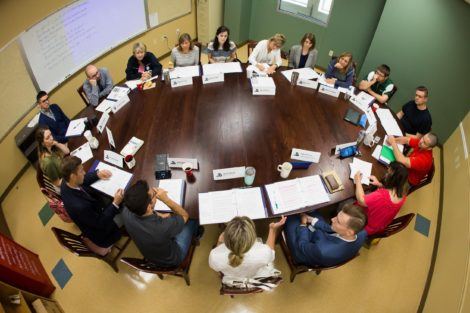 Upper School faculty gather for a 2-day Harkness Training each July. Please contact justin.smith@littlerockchristian.com for more information about the training.

I remember the phone call I made to my dissertation chair like it was yesterday. I hadn’t rehearsed it. In fact, I didn’t really think too long about the implications. After 2 years of research and study on the topic of Independent School leadership, this decision meant I would make a hard turn, about-face, and switch my dissertation topic. I would study Harkness, which is a student-centered, discussion-based pedagogy.  My chair wasn’t exactly happy with me.

I made that call from a 4th floor dormitory room at Phillips Exeter Academy in New Hampshire and it has proven to be the most consequential phone call of my career. Founded in 1781, Phillips Exeter Academy has long been recognized as one of the elite boarding schools in America. With a direct pipeline to the Ivies, Exeter’s academic efforts set the pedagogical high-water mark for student-centered discussions. Here I was, a thirty-something division head from Houston, bunking in a dorm for a week-long Harkness institute.

From the moment I was introduced to Harkness I was intrigued. A colleague of mine commented that if her soul could teach, Harkness would be the way. I, too, feel very much the same. It’s as if seeing Harkness in action, ideas being thrown across the table, allowed the loose-ends of my educational philosophy to be neatly tied. The shift in thinking from the teacher to the student solidified my pedagogical quest.

In 1930, Principal Lewis Perry of Phillips Exeter Academy and philanthropist Edward Harkness endeavored to curate a form of teaching and learning that would put students at the center of their education. In a letter to Perry, Harkness commented,

“What I have in mind is teaching boys in sections of eight… where boys could sit around a table with a teacher who would talk with them and instruct them by a sort of tutorial conference method, where the average or below average boy would feel encouraged to speak up, present his difficulties, and the teacher would know… what his difficulties were… This would be a real revolution in methods.”

Though Exeter was not the first school to support academic discourse, we are all well aware of the Socratic Method of teaching through questioning, it was, however, an early American prep school with a clear, distinct vision for creating a culture of dialogue. Edward Harkness wasn’t interested in small, incremental changes to an already existing institution. He was dreaming of something much more radical – and would fund every dollar needed to see it through.

Years later in 1936, Harkness would give a similar gift to The Lawrenceville School in Princeton, New Jersey, with the same idea that the Lawrencian faculty would organize students around oval wooden tables and engage in discursive instructional practices. These two historic institutions set the independent school expectation for deep learning and skill development by using a 1930s progressive approach that has been able to withstand the pressures of educational shifts, testing, pendulum swings, and accountability. Harkness is not an approach to teaching and learning that is reserved for elite New England boarding schools. Thoughtful educators coast to coast are using student-centered discussions to engage a new generation of intentional Christ-followers who will lead in all industries in the future. Furthermore, I see it as our duty to not just fill the heads of our students with knowledge, but to teach them the necessary skills for civil discourse, debate, fellowship, deep study, communication, and teamwork.

Much research has been conducted in recent years to support teaching and learning. In his book, The Global Achievement Gap, Tony Wagner presents the results of years of study on skills necessary for the 21st century workforce. Wagner and his team from Harvard distilled the data into 7 categories they named the 7 Survival Skills for the 21st Century:

If these are indeed skills students need to develop to be effective 21st century leaders, I argue that Harkness will enhance and promote each of these 7 Survival Skills.

Andy Crouch spoke at the 2017 CESA (Council for Educational Standards and Assessment) Symposium on leadership by leveraging two variables: authority and vulnerability. For those who attended his session, they were presented with the compelling charge of leading with both authority and vulnerability. Using an easel and a large flip chart, Crouch drew a horizontal x-axis and a vertical y-axis. At this point, beads of sweat were noticeable on half of the principals’ foreheads in the room as repressed algebraic memories flooded their frontal lobes. In drawing the axes, his point was to demonstrate that two seemingly contrasting variables were not necessarily mutually exclusive. In fact, a healthy dose of each made for flourishing leadership.

The same kind of integrated approach can be applied to the ongoing conversation in education. Schools and teachers around the country often debate what is most important: content or skills. After Crouch’s presentation, it occured to me that the argument need not be content or skills, it is a both/and argument. Skill without content is weak and pointless, content without skill is lacking force and application, yet the uniting of both content and skill shall form the noblest of character and usefulness to the Kingdom of God. Students, when given the opportunity to sit at tables, engage in and lead discussion, and learn to work as a team, will flourish, both/and.

I finished my phone conversation with my dissertation chair and hung up. I stared out of the 4th floor window overlooking the Exeter quad. I knew then how I would spend the next 2 years delving deeply into the literature and academic research on student-centered and discussion-based approaches. I’ve traveled all around visiting Harkness schools, asking questions, observing discussions, and reading as much as possible. The conversations I’ve had with faith-based and independent school educators has helped shape and inform our school programming, communication, and practices.

I’ve learned that teachers need support, time to plan, and space to have important conversations. Students need guidance, expectations, and clear communication. They need to know that Harkness learning is about teamwork and leadership. Most parents will tell me that they too require information and explanation, especially as we consider the “why” and the “how” regarding our practices. Proceeding on this track, but elevating to a 30,000 ft view, I can’t help but ponder the idea that this timely and timeless innovative approach to teaching and learning might revolutionize Christian education. The ownership of learning, from history to literature to scripture, would shift from the shoulders of the teacher to those belonging to the student. Perhaps Harkness might be a tool used to ignite revival. And maybe Ed Harkness was right, this might be a real revolution in methods.

Dr. Justin A. Smith currently serves as Head of Upper School and Vice President at Little Rock Christian Academy. A graduate of the University of San Diego, Dr. Smith earned his doctorate in Educational Leadership from Sam Houston State. He has led well in administration, teaching, and coaching. With a number of published articles and peer-reviewed presentations on record, he also received such honors as the Excellence in Superintendency Program Award from Sam Houston State University and recognition as The Woodlands Preparatory School’s Most Inspirational Educator. Additionally, Justin serves on the board of an independent boarding school outside of Philadelphia. Prior to leading at Little Rock Christian Academy, he served as Head of Middle School at Second Baptist School in Houston, Texas. He can be reached via e-mail at Justin.Smith@LittleRockChristian.com